The OCD Bully is a concept that was in my mind for several years. My friend, Steve Caplin, finally helped me to realize it. The story of the OCD bully was published in the British Medical Journal on page 779 (BMJ, 2010; 341:c2596)

People with OCD often consider their OCD to be like a bully or a demon that has to be obeyed. During the process of cognitive behaviour therapy, they may be encouraged to “externalise” their bully and to act against it by doing the opposite to what the bully demands. We therefore decided to enhance the environment at The Anxiety Disorders Residential Unit at the Bethlem by making a humanoid version of an OCD bully or monster.

On the outside of the bully are various manifestations of OCD – for example a clock that represents the wasted time of compulsions; a toilet seat that is full of “germs”; knives for fears of being violent; words such as “Paedophile” and numbers such as “666”. The bully has several eyes to depict the vigilance for threat. A door in its chest opens to reveal a heart of stone. At the base is a broken mirror.

The humanoid has a more important therapeutic role. It holds a transparent receptacle in which residents are encouraged to give up their various “safety objects” to the humanoid as a commitment to change. Safety objects are defined as those that are instrumental to aid safety seeking or avoidance behaviors and therefore maintain a person’s obsessional doubts and fears of causing harm. The installation is interactive and therefore evolves over time as each resident makes a donation of a new safety object.

Each donation has its own story and provides encouragement for a new resident to change by following the example of previous residents who have made the commitment to change. Initial donations have included a pair of handcuffs that someone used to prevent him being violent to others; rubber gloves and alcohol wet wipes which were used to prevent contact with contaminants; a mobile telephone used for seeking reassurance; a hooded pullover to cover a person’s face and a magnifying mirror and implements for skin-picking in a person with BDD. The receptacle is very long and so it is difficult to retrieve items once they have been deposited. It therefore depicts another aspect of OCD – hoarding. When the receptacle is full, another will replace it so that unit will eventually be full of clutter. 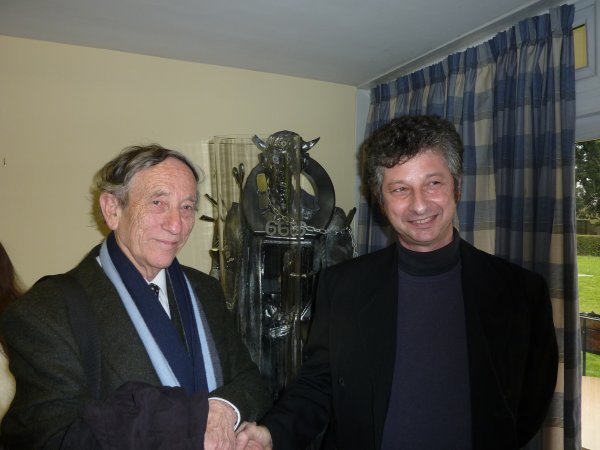 Professor Jack Rachman unveiled the installation at the Bethlem Royal. He is one of the world’s leading experts on OCD. He used to work on the unit about 30 years ago but is now retired in Vancouver.

Steve Caplin is an award-winning artist and writer. The author of a dozen books including Dad Stuff and How to Cheat in Photoshop, Steve is best known for his illustration work. He creates satirical photomontage illustrations for a range of national and international magazines and newspapers, including The Guardian, The Independent, The Sunday Telegraph, The Sunday Times Magazine, Radio Times, Readers Digest, I’Internazionale and many more. Steve Caplin has also been building installations for thirty years, chiefly from found objects and urban detritus. His largest work is a 16-foot working Camera Obscura, located in a garden in Hertfordshire.

I would love to commission Steve Caplin to create more humanoids that depict the force behind other mental disorders. Just think if we had another 10 siblings – we could have an exhibition of them in the Tate Modern!  Please contact me if you would like more details as they are not that expensive (only the cost of the materials and his time ). I think they can really convey the misery and distress of a mental disorder.