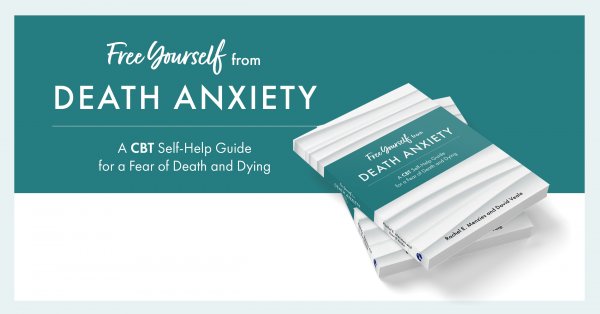 Nothing is certain but death and taxes. Tax I cannot help with, but today I’m launching “Free Yourself from Death Anxiety”. It’s a new book, written together with Rachel E. Menzies, an international expert on the psychology of death.

Fear of death and dying underlies many mental health problems, including health anxiety, OCD and panic disorder. Yet despite death anxiety being so common, little has been written on the subject for professionals or the public. Talking about death has remained somewhat taboo, though a growing movement – spearheaded by the Death Cafes – are working to open up discussion.

Our book is a practical guide aiming to help those suffering from death anxiety to reduce their worry before confronting and overcoming their fears. The book is aimed at helping sufferers live life to the full in the present, without trying to avoid or control thoughts of death or dying. And it aims to help individuals reduce their worry and give them the tools to overcome their fear. This means preparing for death starting with simple exercises like making your will and writing out your wishes for your funeral, right up to collecting Memento Mori and lying in a coffin to contemplate life as it is now.

AND we’ll be at the British Association of Behavioural and Cognitive Psychotherapies conference #BABCP2022 in London on 20-23 July.